Matt and I went to San Clemente to visit his parents over the long weekend in February. We’d been watching the weater closely, yearning for warmer weather. The forecast showed rain Friday, Saturday, and Sunday. We were supposed to leave early Monday morning. Oh, well. At least it would be warmer than Pierre…and no snow.

Our flight got in about 45 minutes late, which put us right smack dab in the middle of Friday rush hour traffic, in the rain. About two hours later we were getting settled and went out for a casual Italian dinner. When in California, I tend to eat mostly fish and hardly any chicken or beef. So that night I ordered a linguini pasta with sundried tomatoes and shrimp. It was good, but we were so tired that by the end of dinner we were ready for bed.

Assuming we’d both sleep in, we surprised ourselves by waking up at 6:30am. Once we were up, we decided to take a walk down to the ocean (only 5 minutes from the condo!). It was overcast and rain was about to hit at any moment, but we wanted to see the large swells. Shortly after we left the beach, it did start to rain. By that time, we were at a restaurant on the pier enjoying breakfast. Matt and I shared ours…seafood benedict and Mexican benedict. Both good and both hit the spot.

The rain stopped just as we finished breakfast, so we spent the next couple hours browsing downtown San Clemente. It’s a great little downtown. Probably 5 or so blocks of quaint shops and restarants. It has a small town feel, but large city qualities. We found a cute deli and purchased some salami, cheese, bread, and wine for lunch on the patio. It’s so nice eating outside in California. We could hear the ocean, enjoyed the sunshine, and also appreciated the lack of bugs. That evening we went to one of the Mexican restaurants downtown. Matt ordered calamari tacos and they were absolutely wonderful! I was kicking myself for not ordering them, although my baja bowl of rice, beans, pico de gallo, and shrimp was really good, too. 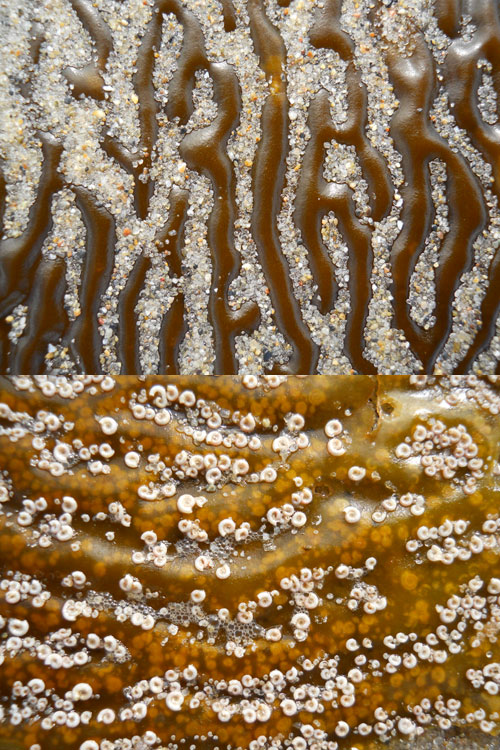 San Clemente has a weekly farmers’ market downtown. They take up half of the street for about two blocks. Everything at this market was raised/grown in California. We picked up some things for lunch: asparagus, eggs, garlic, potatoes, oranges, guava, kumquats, scallops, Russian kale, avocados, strawberries. Matt poached eggs and seared scallops. They were served over sauteed Russian kale and potatoes. Served alongside were blanched asparagus and fruit. Yummy.

Sunday night yielded one of my top 10 meals. Matt and I went to a restaurant called Sushi Gallery. The place was small. I think 10 tables and 4 chairs at the sushi bar. We sat at one of the surfboard tables. Our server, Colleen, was great. She could see we were overwhelmed with the menu, so she made a few suggestions. The chef of this restaurant is known around the world and has a fusion style of making sushi. They were using organic sushi rice…nice. The first roll we had was called the Canyon roll. It was a rainbow roll (various fish on top of a roll filled with avocado, krab, cucumber, and rice) seared slightly so the top of the fish was just cooked. Then they topped it with a fresh salad with the best dressing….kind of a soy / rice wine dressing. It was absolutely amazing. I wish I had taken a photo to show you! Then we each had a piece of BBQ eel nigiri (rice ball topped with fish). It was wonderful. I love eel, so this was right up my alley. Then we had Give You Energy. It was slices of yellowtail sashimi in a spicy miso dressing. Great. Lastly, foie gras nigiri. The foie gras literally melts in your mouth, so it’s almost like eating a really rich gravy. Matt and I just looked at each other and said “wow”. It’s worth going back to San Clemente just for this sushi.

And, that ended our trip to San Clemente. Short, but a nice escape from the nasty we headed home to the next day.