It’s true. We took a vacation to Costa Rica with two of our friends a couple weeks ago. It all came about last October. We were at a Humane Society event together and one of the silent auction items was 9 days in a condo in Costa Rica. We bid on it and won.

Fast forward 5 months later and we’re on a flight to Liberia, Costa Rica. None of us had been to CR and we could only find limited information about Ocotal, the location of our condo.

Our first layover was in Chicago on Friday morning. We needed some breakfast before getting on the plane to Miami. We wandered around and found a great little store with Hint Water (I love this stuff!), fresh fruit, and other organic items. Right next door was Argo Tea. I immediately knew I loved this place. Fresh teas and great little food-to-go for under $6. I chose the Corn and Krab Chowder with Tea-Infused Brown Rice. Yes, I found this in an airport. And, it was good! So, I felt like it was a great start to the vacation. 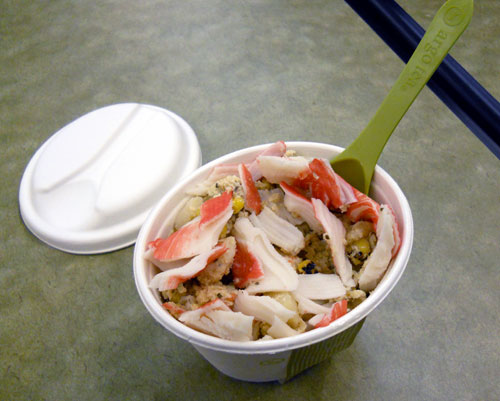 After a couple hours, we headed to Miami. As we started our descent, the pilot came on and said “We’ve just been advised that President Obama is landing in Miami. When Air Force One lands, they don’t let any planes land.” And thus, we circled for 30 more minutes. We cruised past Air Force One when we landed, waved at the security surrounding the plane, and then headed on our way.

A gentleman named Freddy picked us up from the airport. He was nice enough to take us to the Auto Mercado (grocery store) to pick up some things for breakfast. We bought fresh OJ, CR coffee, avocados, whole-grain bread, cheese, water, eggs, pineapple, and chorizo. We had some sliced avocado on toast that evening and let me just say, the avocado in CR is fantastic. That night was the first of many avocados over the next week. 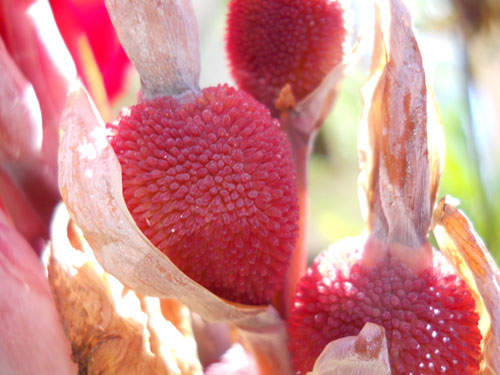 Plant outside the condo

The condo manager, Cheryl, was wonderful. She gave us a bunch of helpful tips, places to visit, and restaurants to eat. On our first full day in CR, we headed to Playa de Ocotal. This was a black sand beach about a 10 minute walk from the condo. The sun rises at about 6am, so we were up at 6:30am nearly every morning. What we didn’t know at the time was that just north a little way was a secret beach and south about 20 miles was a beach made of broken shells. We were surrounded by various beaches, but Ocotal and the secret beach were our favorites.

Once at Playa de Ocotal, we found a restaurant on the beach called Father Rooster. After swimming for a bit and taking in some sun, we had mahi mahi fish tacos. They served the tacos with fried plantains. This was my first experience with plantains. They taste a little like a combination of banana and sweet potato. 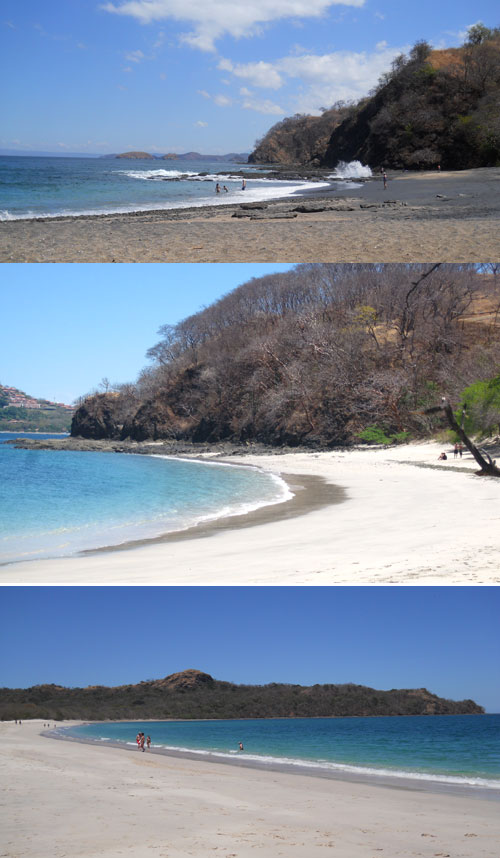 That night we ate at a tapas restuarant called Ginger (http://www.gingercostarica.com/). It was like eating in a tree house…awesome! The food was amazing as well. The best thing about tapas, in my mind, is that you get to try a bite or two of many menu items. You’re not limited to one protein, one vegetable, and one starch. We ordered Spring Rolls, Crispy Wontons, Ginger’s Ahi Tuna, Peruvian-style Seafod Salad, Thai Red Curry Beef on Crispy Plantains, Lettuce Cups with Twice-cooked Pork Belly, and Mongolian Ribs. We thoroughly enjoyed ourselves and the food.

The next morning Matt went to the beach, waded to a boat, and bought a huge red snapper. Scaling him was quite a chore, but much needed if we planned on roasting him whole that evening. 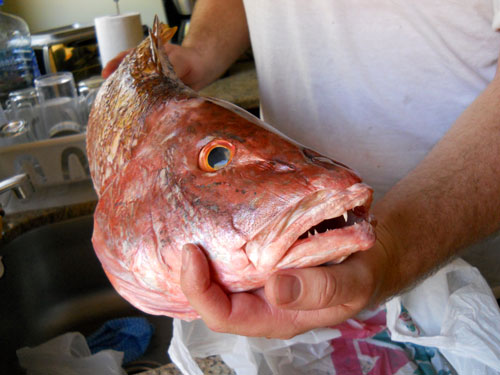 Matt prepared him (her?) with fresh onion, cilantro, and coconut milk. We ate the fish with rice, beans, pico de gallo, and guacamole. The next night, we lightly fried pieces of the fish and had some amazing fish tacos. 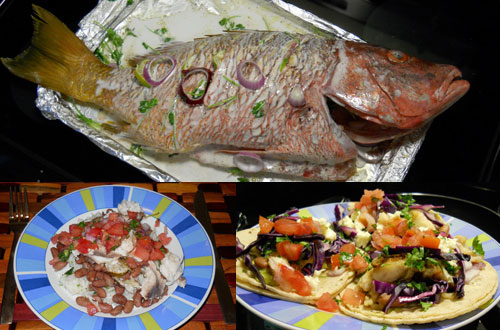 On Monday we drove to Playa Conchal, the beach comprised of broken shells. This is supposed to be the most beautiful beach in CR. It had turquoise water like I’ve never seen before. It was the kind of beach I never really thought existed. And pictures don’t do it justice. Notice my Envirosax bag…so handy on this trip! 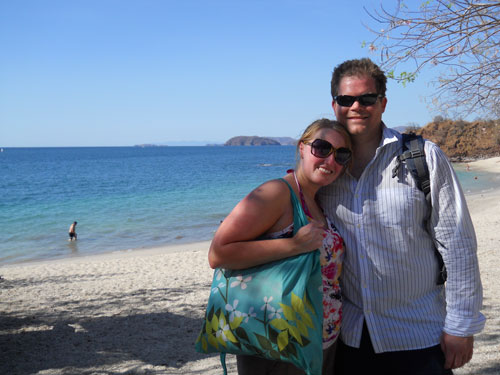 Tuesday we headed to the secret beach. In order to get there, you have to pass through a gated entrance, drive on some terrible dirt roads, and then walk about 1/4 mile down to the beach. There were a couple people there, but for about an hour we were the only 4 people on the entire beach. It was incredible.

I starting picking up shells my first day in CR. My grandparents used to travel quite a bit and my grandma always brought shells back for me. Walking along the beach, picking up shells, made me think a lot about my grandma. She would have so enjoyed the water and the shells I found. 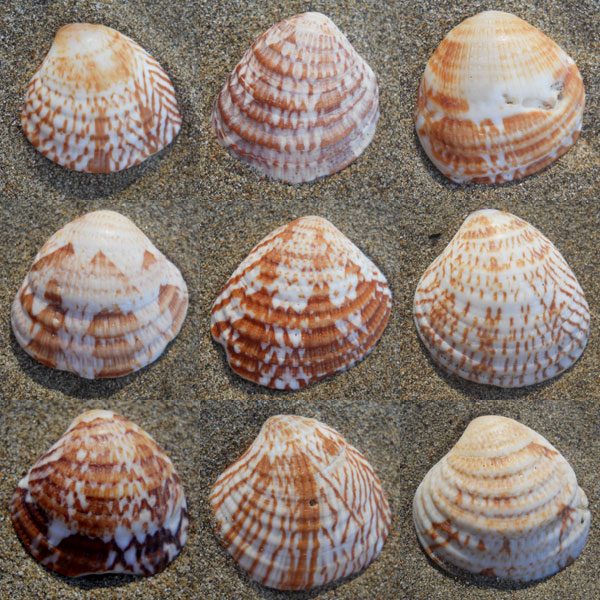 I specifically searched out shells like the ones she brought back for me. I ended up bringing back 3 quart-size bags full of shells! It’s amazing to me how so many different shells exist. 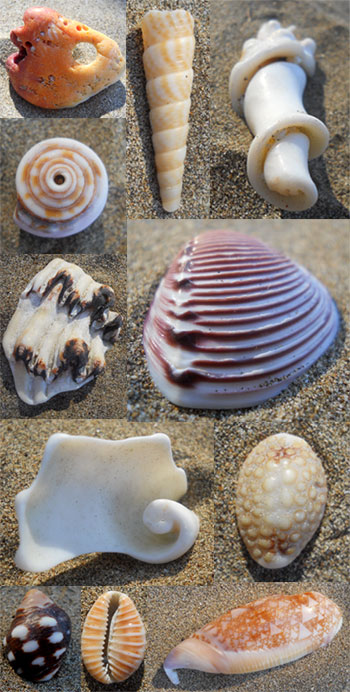 Tuesday evening Matt and I went to Citron (http://www.citroncoco.com/) for dinner. We shared a super tasty ceviche appetizer including sea bass and tuna and served with yucca chips. The yucca chips were fantastic and an excellent compliment to the citrus spiked fish. For dinner Matt ordered the Grilled Tuna and I ordered the Sauted Sea Bass (with Swiss chard!!). This was a wonderful meal and we savoured every bite.

Wednesday was a big day. We headed to Rincon de la Vieja Volcano for an adventure day at Hacienda Guachipelin. I conquered a fear by going on 7 zip-lines. After zip-lining, we went on a 5 mile white water tube ride down the volcano. This was amazing, aside from my getting royally stuck and needing help to get free. I spent about 98% of the time going backward, of course beyond my control. And the one time I did go forward down a drop, I fell off and needed help again to get back on my tube. Joey and Christy went horseback riding to a waterfall. And then we all went to a spa for a hot mud bath, which really meant that we painted hot mud on each other, let it dry, and then rinsed it off. Our skin did feel a bit softer when we were done and it was a lot of fun.

On our way back, we stopped in Liberia for dinner. Christy had a vegetarian pizza, Matt and Joey had chicken and rice, and I had shrimp and rice. The star of this meal was the seafood salad appetizer. It was fresh and full of yummy mussels, clams, calamari, shrimp, and white fish. 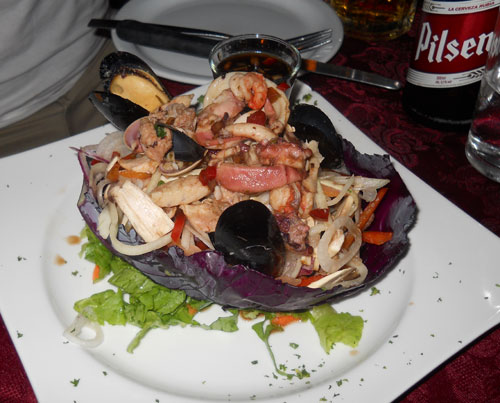 On Friday, Joey and Christy headed to Arenal Volcano for the day. Matt and I walked down the road to Pan Casero to pick up some fresh empanadas. I had something specific in my head, but it wasn’t what we found. The empanada bread was a little like a large, moist, hot dog bun. Inside one was what we think was carmelized plantains. The filling on the other is still a mystery. It was kind of like a dry Parmesan cheese, but with a slight hint of bacon. After empanadas, Matt and I walked to the beach and hung out for a few hours. 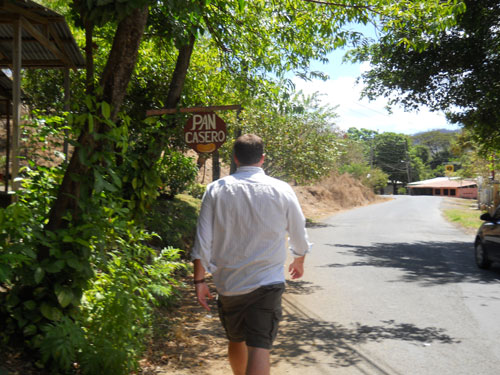 When Joey and Christy got back we took them to Citron for another dose of the Ceviche. We also tried the Beef Tenderloin Carpaccio which was also very good. After the appetizers we left and went to a place we’d been wanting to try since we arrived…Pollo Crispy. Yep, fried chicken. There were fried chicken stands everywhere, so we knew we had to try it at least once. Ours was served with two Mission tortillas (odd to see Mission brand in CR), pico de gallo, and refried black beans. It hit the spot immediately! 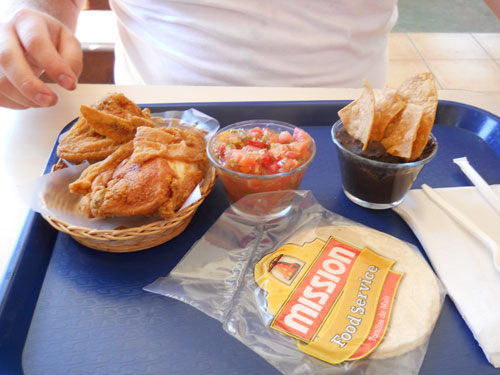 Saturday morning, our last day in CR, the guys went deep sea fishing. They only caught a couple black tunas, but they saw a large group of jelly fish and some sea turtles. They both enjoyed the time on the water. While the guys were fishing, Christy and I had breakfast and did some shopping at Congo. Christy had the oh-so-yummy banana pancakes with an iced coffee. I had a 3-cheese calzone-type thing with a small salad (I love savory food for breakfast) and an iced latte. When the guys got back, we had the chef at Father Rooster grill the tuna for us. It was much darker than tuna we’re used to…thus the “black” tuna…but the flavor was wonderful. They served it with rice, beans, plantains, and a great soy-based sauce. Followed with a Tika Linda (signature Father Rooster drink), this was a great meal! 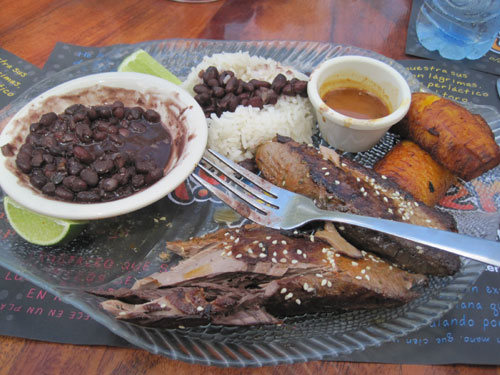 Because this was our last night in CR, we went to Pacifico for sunset. This is a fabulous place with beds and lounge chairs on the beach, and an even more fabulous view of the sunset. I’ll leave you with our last sunset in CR and say…it was a really nice vacation. We’re back and revving up for Spring and gardening season.