It’s been a couple weeks now,  but one Sunday morning when Matt and I were enjoying breakfast together we started discussing dinner. We do this a lot, simply because we might have to start thawing a chicken, or begin a soup, or something else along those lines. It’s usually the one day of the week where we can really spend time making a tasty meal. Thank goodness Debby cooks for us when we’re at the farm!

On this particular Sunday, we decided to make a Roasted Orange Tomato Soup. Then we decided to cook the last of the fava beans. But, we also had some artichokes (yes…these can be grown in SD!) that had to be used. And some zucchini which needed to be dealt with. Knowing it was going to be a lot of food, we looked at each other and said “We better have some friends over tonight to help us eat this”. Later that evening, we sat down with 4 other friends and enjoyed a fantastic meal from the garden.

We started the Roasted Orange Tomato Soup pretty early because we wanted to slow roast the tomatoes. 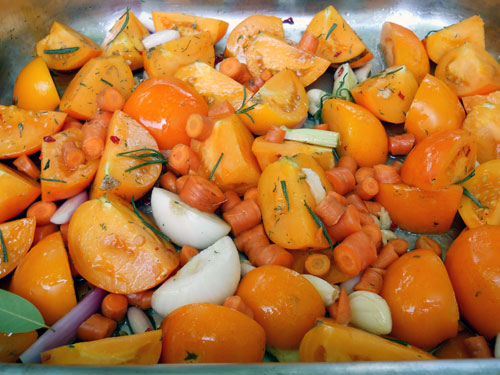 To the tomatoes, Matt added onion (thanks Springer Ridge!), garlic, carrot, rosemary, thyme, 2 bay leaves, and a dried chile. We roasted the vegetables at 350 degrees for a couple hours, checking it now and then to give it a toss. This is what it looked like when we took it out of the oven.

All of this got blended with some homemade chicken stock into a lovely, slightly spicy, smooth tomato soup.

I started shelling the fava beans early, too. First you have to remove the beans from the shell and then you have to remove the outer shell of the bean to expose its lovely bright green interior. It’s a labor of love, for sure, but everytime I bite into one of those buttery beans I forget about the hours (literally, probably 1 1/2 – 2 hrs) it took to shell them. We prepared the fava beans and potatoes simply. For the potatoes, we used a mix of Purple Viking (these are fantastic and we’ll definitely grow more next year) and Red Norland. The potatoes were boiled until nearly cooked through and then we added the fava beans for the last few minutes. Tossed with a little butter, salt, and pepper…that’s all this dish needs to be fantastic. 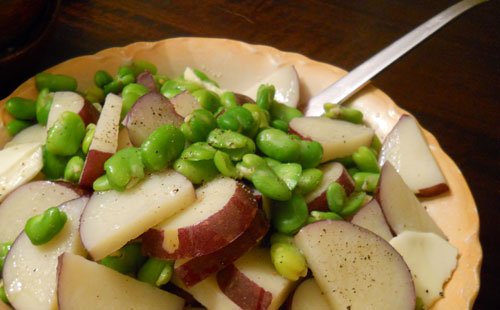 Zucchini…oh the massive amounts of zucchini. My dad is the lucky zucchini harvester this year. I started in this role last year and somehow tricked him into taking it over part way through the season. He hasn’t been able to trick me back into it yet this season. The picture below is the Shaved Squash Salad with Prosciutto recipe I shared a couple weeks ago. It’s a really great, bright, fresh salad and a perfect way to use zucchini.

Now, what you’ve all been waiting for…artichokes. Last year we grew 8 plants to see if we could actually grow artichokes here. We succeeded in growing some mighty fine baby artichokes, so we expanded to about 60 plants this year. They haven’t produced enough to bring to market, although they might, so we’ve been enjoying them at home.

Fresh artichokes are pretty much a mystery to me. I’m very familiar with the canned version…bruschetta, spinach artchoke dip, etc. I didn’t realize that the leaves had little spines on the ends and they will poke you when you’re harvesting. I literally yelped a little upon the first poke. It took my by surprise. So, after harvesting…what to make with them? I knew of an artichoke recipe where you steam the artichokes and then use the inner leaves to dip into some sauce (if you’ve seen Sex and the City the movie, you might remember a scene with Carrie and Miranda on Valentine’s Day…something along those lines), but that recipe uses full-sized artichokes and we just have little babies. Ours are about 3-4 inches in diameter. After a search online, I found a recipe for Fried Baby Artichokes.

Had Matt not been helping me, I would have started this process shortly after breakfast. But, of course, he was more than willing to help. We teamed up on the baby artichokes, all 14 of them, to prep them for frying.

Directions:
Create a citrus bath by squeezing 1/2 lemon into a bowl of cold water.

Trim the baby artichokes by pulling off the outer green leaves. When you get to pale green and yellow leaves, stop. Cut off the top green portion and some of the bottom stem. Slice the artichoke in half lengthwise. Use a grapefruit spoon, if you have on, or a small knife to scoop out the fuzzy inside. Place artichokes in water. They will turn a light brown…I had no idea, since the canned ones are rather white. Thank goodness Matt knew or I might have thought they were bad and tossed them.

Remove 5 artichoke halves from the water and pat dry. Dredge in flour then fry until golden brown, about 2 minutes er side. Remove and season with salt. Top with shaved Parmesan and serve with lemon wedges. So yummy!

These were really a hit! They were still slightly warm, crispy, yet soft on the inside. Slight artichoke flavor with a little saltiness from the Parmesan and a hit of citrus from the lemon. I could have eaten these all night. We have a few artichokes in the fridge now and I’m hoping Saturday night might be filled with fried artichokes!