Once in Malaga, we took a taxi from the airport to our B&B. El Riad Andaluz was an excellent choice for our first trip to Malaga. Hidden behind the front door is a lovely, two-story building with a patio on the main floor which opens up to the sky. The owners live in the first floor flat with their young child, a Pug named Maurice, and a gray long-haired cat named Bidou. Of course, I was thrilled to see they had animals! It made our stay there feel more like home. 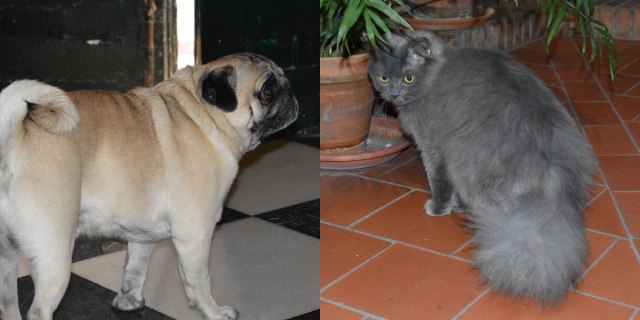 We were guided up a flight of stairs to our room, complete with a private bathroom and a patio of our own. Both of us knew we would adore our time sitting at the small table, enjoying a bottle of Spanish wine. But at this point, we were both so drained from the 23+ hour journey we just wanted to sleep. 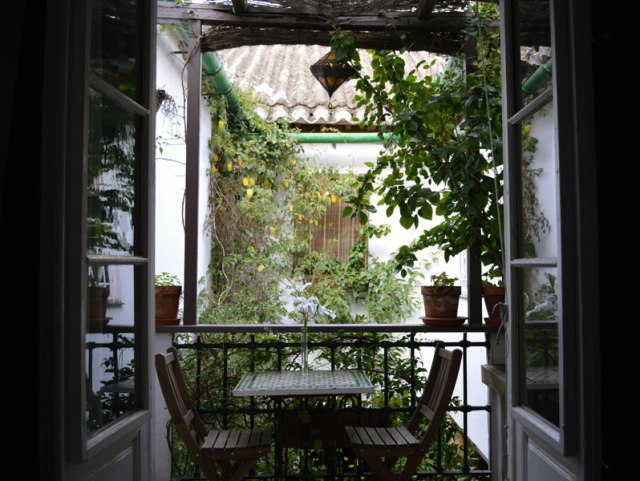 It couldn’t happen. Not quite yet. Our first meal was directly in our sights. Spaniards in Andalusia eat late. If you arrive at a restaurant at 8pm, you are…well, you’re lucky if it’s even open…and if it is, you are an Early Bird.

Per our host’s recommendation, we walked to Citron which was, at most, a 5 minute walk from El Riad with about 15 tables. We arrived at 8pm, just as they were opening, Early Birds just off the plane. In our state of exhaustion, although we were really excited about the prospect of tapas, we were pleasantly surprised Citron offered a menu similar to what we’re used to back home. Appetizer and entree, followed by dessert.

Upon arrival, we were greeted immediately with some fresh bread and a yummy curry tuna spread. The server recognized, probably before she reached the table, I wasn’t Spanish. I should probably mention here that Matt is some sort of language wizard. About 3 years into our relationship, on a random evening in the middle of a conversation, he threw out some French. I asked how he knew French and he said he didn’t. “Um, but you just had a short conversation in French.” He had taken 1 year of French in college. Mind you, that was at least 7 years prior. I can’t even remember my previous address and he could have a short conversation in French! About 6 months prior to our trip, we purchased Rosetta Stone, Andalusian Spanish…which is very different from the Spanish I learned in high school. The “c” in gracias is a “th” in Andalusian Spanish, just to mention one difference. Matt learned a lot, advanced rapidly. I did not. My language skills are not adept like his. Good thing I’m good at math. That will come in handy, right?

So, back to dinner. The server politely asked us if we wanted English menus. A resounding “Si, por favor” from me, but Matt opted for the Spanish menu. We shared the Puff Pastry appetizer, which is still an option on their current menu. The plate was filled with four squares of puff pastry topped with a creamy foie gras mousse, drizzle of blueberry sauce and dusting of powdered sugar. Yes, it was sweet and almost dessert-like, but it was divine. For entrees, Matt ordered the Salt Cod served over roasted pumpkin puree and asparagus while I ordered the Risotto with mushroom and shrimp. Variations of each dish can be ordered from the current menu and I would highly recommend either.

As we neared dessert, the server gave us menus to review. After she walked away, I realized I didn’t get the English menu…oh, this will be fun. I perused the list and recognized a few words. At the same time I was thinking “I really don’t know any Spanish”, Matt said “Oh, they gave us the French menu!” Wow, I have a long way to go.

Matt ordered the Apple Crepe with Chocolate and I ordered the Cheesecake. Mine was somewhere between a ricotta and queso fresco cheesecake accompanied by a raspberry sauce. It was very tasty and Matt’s was excellent as well.

We had a leisurely walk back to El Riad and settled in for a long night’s sleep. My rule when traveling is to push through your arrival day and sleep as long as you need to that evening. You wake up, no shame, 12 hours later refreshed and on the same time zone…ready for your first full day in Malaga.

1 Response to The First Trip – Malaga, Spain – The Arrival