Knowing today was Three King’s Day, Matt and I wondered if businesses would be closed to spend time with family. Surprisingly, many were open. Our breakfast was spent at Los Niños del Flor with Jerry and Mitchell. We ordered what was becoming our “usual” on this trip, jamón tostada and café con leche. It’s just so good.

Matt and I enjoying breakfast with Jerry. Thanks for taking the photo, Mitchell!

Jerry headed back to the apartment to feed the cats and Mitchell took Matt and I on a full-day excursion through Sevilla. We were lucky to have Mitchell, who knows so much about Sevilla’s history, take us on this tour. If only I had listened a little bit better. I’m sure Matt retained all of it and I’ll consult with him later…as usual.

It’s not that I’m not interested in history. I am. But, my senses tend to go on overload. I want to take pictures of everything I see and I want to examine each and every building and smell all the unique smells and listen to the birds and the city noise. Something has to go. Apparently, it’s my ability to absorb history.

Mitchell knows my love of art and creative pieces. We share that interest and have similar artistic taste. He took us to Plaza del Museo where local artists sell their pieces every Sunday morning. Because of Three King’s Day, only a few artists were set up. It was probably a good thing, because I wanted to get a little something from everyone! I absolutely fell in love with these long panoramic paintings of treetops. I finally talked Matt into one for 65 euro and promised to carry it the rest of the way if it didn’t fit in the suitcase, which I was sure that it would. It didn’t, but it did make it safely home and is now framed in our bedroom. I adore it every day.

I was also obsessed with another artist who was printing his photography on wood and roots. I had completed a similar project while in art school. Once printing on peelings from a birch tree. Another time, I took pictures from Andy’s, a diner in Highlands Falls, New York and printed them on glasses, plates, napkin holders, sauce pots, etc. For my presentation to my class, I served them breakfast on these items. I held on to a couple pieces…

Knowing I couldn’t get anything too large, especially after convincing Matt to purchase the panorama a few minutes before, I opted for a 5 inch tall piece. Both the painting and the wooden photograph are unique to our trip to Sevilla and one-of-a-kind pieces we’ll treasure forever. For me, this was a highlight of the trip.

Our next stop was Metropol Parasol, also known to many as Setas de Sevilla (Sevilla Mushrooms). It is located in the old quarter of Sevilla and was completed in 2011, just two years before our visit. Construction began in 2005 and was originally supposed to be completed in 2007. A number of issues delayed progress and when we visited in January 2013, it was still causing a but of controversy. Said to be the largest wooden structure in the world, the views of Sevilla are stunning.

The scale of this structure is really difficult to describe, but in the photograph above you can get a bit of an idea. When the city decided to utilize this space, initially for a below ground parking lot, they uncovered Roman ruins. So, along with visiting Metropol Parasol, you can also visit the Antiquarium below. New literally meets old. 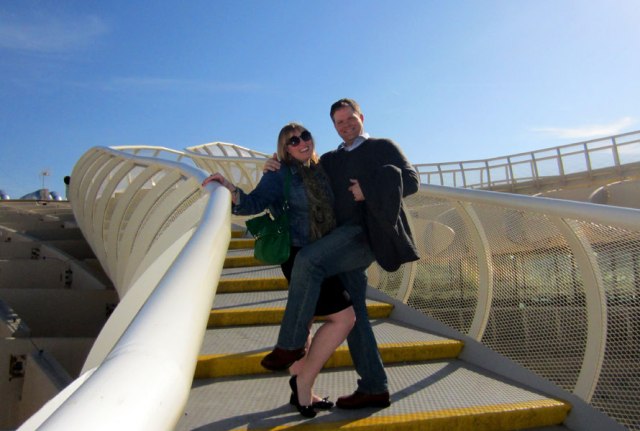 Then we walked. And we walked. And walked. Although a lot of walking, we passed through some beautiful areas including Jardines de Murrilo. Eventually we arrived at Plaza de España. Apparently, some of the newer Star Wars episodes were filled here. But for us, the intrigue was finding San Fernando. Matt is the 23-great grandson of San Fernando, so as Mitchell likes to say…he and I married up.

Not far from Plaza de España, we stopped at Bar Citroen for lunch. Along with jamón and croquettas, we had a lovely eggplant dish. Grilled eggplant topped with balsamic vinegar, caramelized onions, and warm goat cheese. Warm goat cheese on anything is excellent from my perspective, but there was something about the combination of texture of the eggplant and the contrasting sweetness from the caramelized onion. The restaurant wasn’t much to talk about, but this was worth another visit.

After a much needed siesta, we walked with Jerry and Mitchell to Duo Tapas for dinner around 9pm. I really enjoyed Duo Tapas. It’s got a bit of Asian fusion along with Spanish favorites and all served as tapas for sharing. We started with a glass of Vino de Naranja, the fragrant wine made with Sevilla oranges. Then, we ordered 8 tapas.

The entire meal was superb. We yearned for another opportunity to visit before moving on to another city. Highlights included the Tuna Tartare which was extremely fresh and served with guacamole and tortilla chips, Octopus which is one of our favorite foods and Spain does it right, and the Carrillada which came in the light potato puree, sprinkled with Spanish paprika and olive oil. But the pièce de résistance of the evening was the Magret de Pato. Thinly sliced duck served on thick cut potatoes topped with pineapple jam. Wow. Just wow. A few of the servers spoke some broken English which was nice for me. After a complimentary glass of house made limoncello, we were on our way.

We topped off this memorable day with some ice cream and a leisurely walk home.